INTERNATIONAL SOCIETY for the Preservation of the Tropical Rainforest 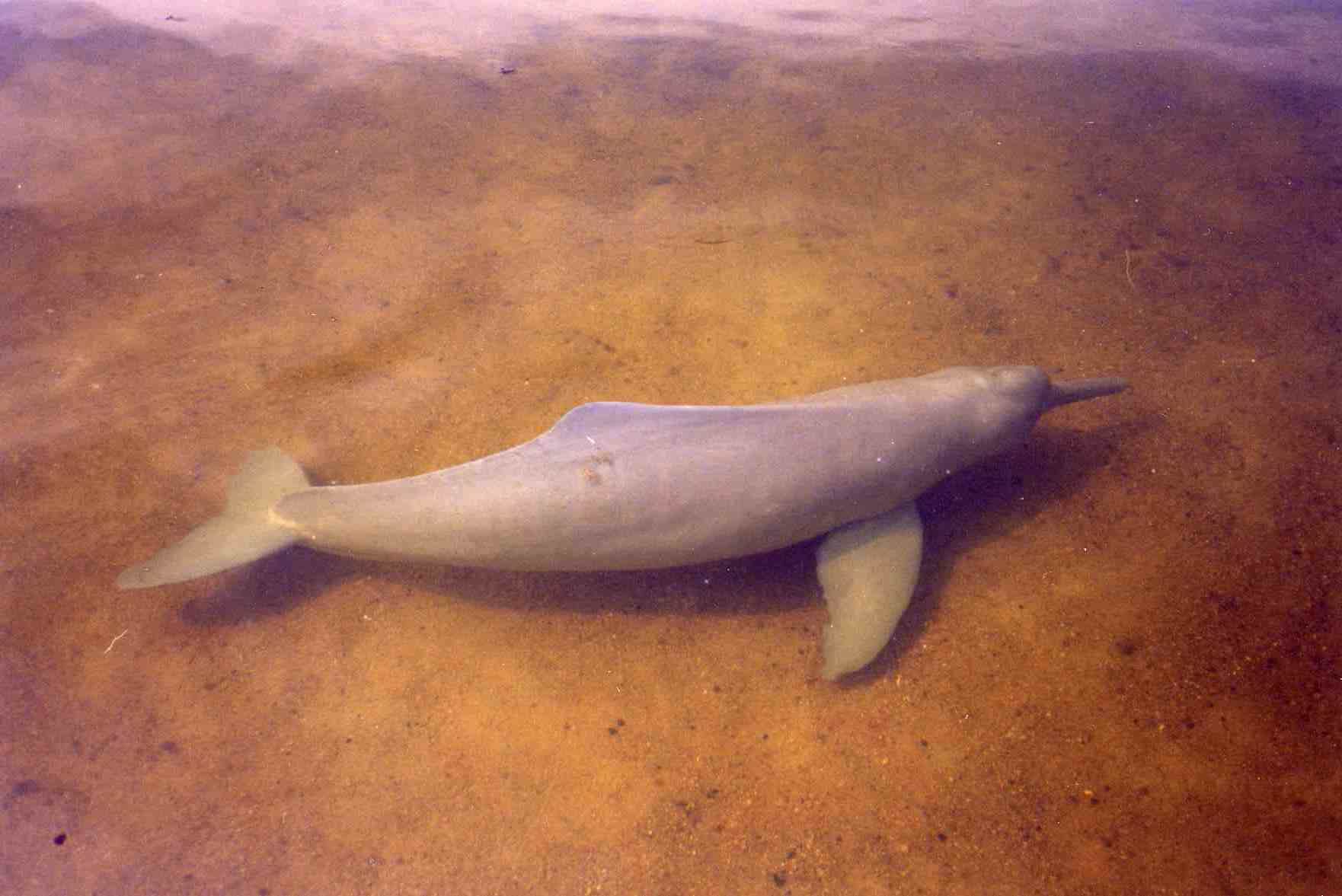 Of the five freshwater species of dolphins in the world, the pink Amazon River dolphin, Inia geoffrensis, or “bufeo colorado” as they are known in Peru and “botos” as they known in in Brazil, are considered to be the most intelligent.

These friendly, sensitive, mammals with a brain capacity 40% larger than that of humans, who have lived in harmony with the people of the Amazon and its tributaries for centuries, now face extinction in some tributaries. What was considered to be one of the least threatened species of dolphins 20 years ago, has now become one of the most endangered species due to the accelerated and commercialized rape of the Amazon basin and the destruction of the South American tropical rainforest.

No one knows the actual number of Inia geoffrensis that live n the Amazon basin, but according to the reseach and studies that Roxanne Kremer has conducted in the Upper Basin of the Peruvian Rainforest, 150 kilometers upstream of Iquitos, Peru, the number of pink dolphins from 18 years ago has risen from eight pink dolphins on the Yarapa River to 35 to 45. Ms. Kremer counted the dolphins in July 1998. ISPTR believes that her work with the Peruvian Forest Police to protection both species of river dolphins, and empowering the local peoples of their rights and use of the law, there has been less illegal commercial fishing and logging in the area, thus saving the natural habitat of the land and aquatic life.

The struggle to save these treasured beings as an important link in an ecosystem — currently being encroached upon by industrialized forces — is being spear-headed by the non-profit International Society for the Preservation of the Tropical Rainforest (ISPTR), whose first globally known project PARD, the Preservation of the Amazonian River Dolphin.

Ecological factors strongly influence social behavior. Because Amazon River dolphins do not have any known natural predators — other than humans — they do not need to live in large groups, or “pods,” protection as many dolphin species.

Inia geoffrensis (pink dolphins) engage in solitary hunting/feeding strategies during the high water season when their prey fishes disperse into the floodplains. At other times, they are found in small “family” groups of 5-8 animals which seem to be led by a dominant adult male. At river confluences, we have seen as many as 35 pink dolphins cooperatively herding and banking fish, often in association with the gray dolphins.

Sotalia fluviatlis (gray dolphins) are strongly gregarious animals and manifest strong social ties with their own kind. Given that they seem to practice a polyandrous breeding system and females tend to be a bit larger than males, they may have a matriarchal social order.

Habitat and Distribution: Tributaries and main rivers of the Orinoco River systems of South America. They tend to gather at confluences of rivers.

Reproduction: Calves can be born between July and September, but in front of Dolphin Corners, our lodge becomes a nursery for calves during December- February. Calves are born about 75 cm (30 in.) long, and weighing just over 1 kg. (2.2 lbs.) after a gestation period believed to be nine to twelve months. Sexual maturity in males is reached when they are about two meters (7 ft.) long, and females at 1.7 meter (5.5 ft.) at an unknown age

Diet: Crustaceans, catfish and small fresh water fish. A unique characteristic of Inia geoffrensis is the unfused vertebrae in its neck, which allows for the 180-degree head turn, giving them greater flexibility in floodplain forests, grassland, tributaries and shallow waters. They have a hump on their back instead of a dorsal fin.

Coloration: The reasons for the unique coloration of Inia geoffrensis are poorly understood, but the presence of capillaries near the surface of the skin probably accounts for much of its characteristic pink flush. Other factors may include age of the animal, chemical disposition of the water (especially iron content), and the temperature of the water.

Ancestors: Ancestors of Inia geoffrensis were a relatively successful marine group, but were displaced during the Miocene period by the appearance of more advanced delphinids. Inia may have entered the Amazon from the Pacific Ocean approximately 15 million years ago, or from the Atlantic Ocean between 1.8 million and 5 million years ago. Their long beaks (often lined with tiny hairs), small eyes, disproportionately large flippers and highly flexible bodies — once considered “primitive” features — are now recognized as specialized adaptions to a complex environment.

Soltalia fluviatlis is a warm-water coastal species distributed from the eastern coast of Central America down along the northeastern coast of South America. No one knows for sure when some of these delphinids began to occupy and adapt to freshwater river systems. They are one of the few delphinid species which can move freely between fresh, brackish, and marine waters.

Intelligence: The intelligence of Amazon River dolphins has not been extensively tested. Their encephalization quotient (the ratio of brain mass to body weight) compares favorably with that of the bottlenose dolphin (Tursiops). The gray dolphins tend to be more “cautious” than the pink dolphins, perhaps because of their small size and very delicate skin. On the other hand, Inia is known for its highly developed sense of curiousity and it rapidly associates with man in a variety of serious and playful ways.

Dolphins and People: Given that these animals are threatened with extinction in certain tributaries, we do not actively seek or encourage overtly “friendly” contact with the Amazon River dolphins. Their chances of survival are greatly enhanced if they remain suspicious of human beings and maintain a certain distance.

Incidental mortality due to fishing nets is very common throughout the Amazon Basin, although it is impossible to estimate the total number of net-related deaths. Gill nets, used by commercial fisherman, are regarded as the most dangerous to the dolphins.

Contrary to popular opinion, all dolphins are capable of behaving agressively toward human beings at certain times and under certain conditions. There are a number of reports of pink dolphins pushing people to the shore after their canoes had capsized. The dolphins figure prominently in the local mythology and their reputation varies from one tributary to another. In some locations, the pink dolphins are considered as unpredictable brujos (wizards), and, in other locations, they are benign and helpful semi-divine beings. The gray dolphins are usually regarded as “sacred” animals, especially by various Indian tribes. Up until recent times, the dolphins and people who live along the Amazon River existed in harmony with each other. It has only been within the past three decades, more or less, that the psychic relationship between the people and dolphins has been fractured as a result of deforestation and habitat degradation. ISPTR/PARD is dedicated to protecting these unique mammals and their tropical rainforest ecosystem, thus healing this time-honored relationship, not only for the dolphin’s sake but, also, for the sake of our own human spirit.

To purchase a scientific paper on Inia geoffrensis authored by Roxanne Kremer contact information below.

With your donations you will be “giving us the precious breath of life.” The inhabitants of the Amazon Rainforest thank you!
Lady Roxanne